Legacy has a long and proud tradition of developing programs specifically designed to enrich the lives of the children and young people under its care.

From the 1920s through to the late 1970s, Melbourne Legacy would provide classes for junior legatees in dancing, gymnastics and eurythmics – a form of timed movement to improvised music, not the seminal ’80s British pop duo, in case you’re wondering.

Dazzling Melbourne back in 1933, ‘A Legacy Club Revue’ showcased the talents of some 200 children chosen from amongst the 1355 being assisted by Legacy following the huge loss of soldiers in The Great War.

Performed at the prestigious Bijou Theatre in Bourke Street, the revue programme offers a snapshot of difficult times, with an advertisement for The Legacy Employment service speaking to the spiraling unemployment rates that peaked to 30% in 1933.

From 1928 to 1979, these annual demonstrations were often held at the Melbourne Town Hall, with participants resplendent in beautiful costumes made by the members of the Junior Legacy Mothers’ Club and the Melbourne Legacy Wives’ Association.

While today’s youth programs tend to focus more broadly on developing the skills and confidence of young people transitioning from childhood to young adulthood, Melbourne Legacy continues the tradition of empowering its legatees with enthusiasm and compassion. 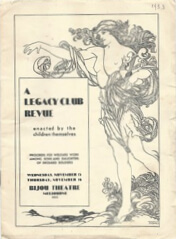 The front cover of a programme for a Legacy Demonstration at the Bijou Theatre on 15th and 16th November 1933.