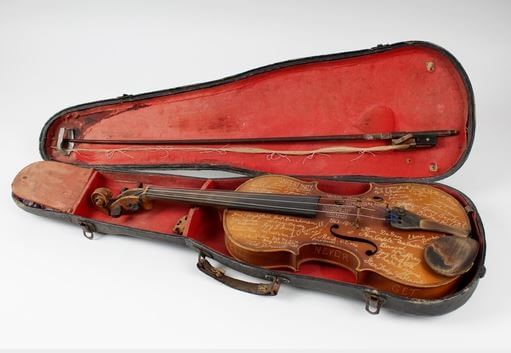 Playing For Their Lives

One of Melbourne Legacy’s most unique possessions is somewhat worn violin which belonged POW Roy Arnel.   After Roy’s incarceration in Changi Prison Camp in 1942 a thoughtful Chinese threw it over the wall where he was able to retrieve it, and for the next three and half years it was played in concerts given to Australian, British, US, Dutch and other POWs at Changi.

Roy asked many of his friends to etch their names on the instrument and he brought it home after the war.   After he died in 1982 his widow, Mrs Netta Arnel presented the violin to Melbourne Legacy, and Allan’s Music Centre donated the services of their instrument restorer, Roger Lewis, to recondition it.

It was on display for many years under glass in the entry foyer, but by 2017 it was clearly deteriorating, and acting on advice from Victorian Collections it was catalogued and locked away carefully in the Melbourne Legacy Archive.

In 2019 further research was done and the Australian Museums and Galleries Association Victoria advised that the fading of the wood was likely to be due to the lignin in the wood being affected by UV exposure.  The good news was that it could be displayed again without further damage if it was under UV resistant glass.

This was when Tashco Systems, who supply museum showcases, heard about it and offered to look for a reasonable solution for what they termed “an extraordinary and beautiful piece of enormous national significance.”

It wasn’t long before they came up with a UV resistant glass case of the perfect size which was surplus to an order they had filled.  Their generosity extended to include delivery and installation and the violin is now proudly displayed on the first floor of Legacy House in Swanston Street, where once again the public can see it.

Further information about the violin can be found in the Melbourne Legacy catalogue on the Victorian Collections website ( victoriancollections.net.au ), Catalogue No. 00080