Home/Latest News and Updates/The Many Faces of Legacy Week

As Legacy Personality of the Year in 1996 and ’97, Daryl Somers joined a cavalcade of celebrities previously invited to be the face of the organisation.

The triple Gold Logie award winner proved to be an exceptional ambassador, genuinely engaging in a series of promotional events with a big heart and even bigger sense of humour.

Along with compering the aptly named gala function, ’A Night To Remember’, Daryl participated in a number of lunches, a car raffle, and a parachute jump with Ron Barassi, who was also a Junior Legatee following the war-time death of his father, Ron Barassi Senior at Tobruk.

This annual campaign, begun in 1942 and run in September, was initially chosen to coincide with Father’s Day, an anniversary keenly felt by junior Legatees that also resonated with empathetic and supportive donors.

Each Legacy Personality of The Year, selfless with their time and generous of spirit, helped to raise both funds and awareness, creating a tangible difference to the lives of our veterans families. 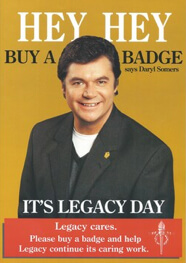